My father-in-law enjoys a good rant. Although not a grumpy old man, he is a man in his mid sixties; successful in his career although long retired. Whilst it’s not his defining characteristic, he is compulsively METICULOUS in his execution of spelling and grammar. He hates American exports. 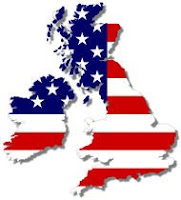 He’s really thinking about their language exports in particular. Small pieces of Americana drip-feeding into our psyche. Example: Have you tried renting a film recently? You might have more success renting a movie. Would you like me to post it to you? Yeah, “mail” it to me. Not sure? Do the math. That sort of thing.

Now, he’s not suggesting that our blacktops will be lined with sidewalks or that we’ll be buying diapers and candy with our hard earned greenbacks just yet… but it may happen eventually. Does the gradual colonisation of the English language from across the pond matter though? Language has continued to evolve since, well, since forever. We don’t talk or write like our Victorian ancestors any more than they spoke or wrote like their Tudor predecessors.

So if this has always been happening, why the fuss? I “guess” it’s because the pace of change has increased significantly in more recent years due in part to the proliferation of American television programs; oops, that should be programmes. Also the vast number of websites written in (at best) international English but more likely spell-checked by the U.S. dictionary version of MS Word must be guilty of cultural imperialism.

How does that makes you feel when you’re on the receiving end of Americanized marketing material? I know how it makes my father-in-law feel because he told me. Several times. And in great depth too. It might be fair to say that a younger audience wouldn’t give “a rat’s ass” and may even embrace cool, Americanised txt msg style yoof speak whilst the older consumer would much prefer the written word to be spelt in precisely crafted and fully Anglicised English.

The point is that clear audience segmentation prior to any form of communication is the key to successful marketing. A business might have a very wide audience encompassing twelve year olds boys through to octogenarian nuns, but to manage one marketing campaign to successfully engage with them all would be ridiculous to the point of possibly being offensive.

Do you need to outsmart your competitors? Contact us now on 01449 782235 to discuss what you need and how we can help you meet your goals.

Why not find out more about Business Vitamins, Strategic B2B marketing agency Suffolk.

With the coronavirus outbreak impacting so many lives and businesses around the world, we are focusing our Services and Support team on helping customers mitigate the impact of this pandemic.

If you have urgent marketing or communications needs, please contact us immediately or schedule a free consultation now and we will do our utmost to provide the necessary resources to address your requirements.